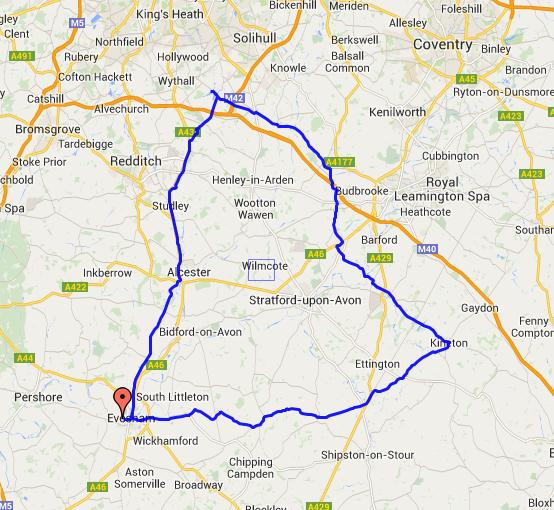 After falling off back in January, I’ve not actually done another Audax until now. In an effort to get back on the wagon and prepare for the Norwich 100 at the end of May, it was time to do some longer rides again!

The ride was planned as 112km and contained nothing too scary routewise.

The route started from Evesham and I cycled from an overnight stay, at my mum’s nearby, to the start. It turned out that I hadn’t actually uploaded the route to my Garmin but in good Audax practice I’d printed off a copy of the route sheet so no dramas.

I was given the go ahead to start at 8:55am and seemed to leave before most of the other riders who were waiting for 9am – this meant I didn’t see anyone else for over an hour.
The route went back the way I’d just come through the villages of Badsey, Bretforton and Honeybourne before tackling the Meon Hill climb outside of Mickleton – it’s nothing too taxing but a good leg warmer. Heading on the route was largely flat until a bit of a rise by Pillerton Priors where two guys going at a decent speed came past, I jumped onto the back and ended up going 20mph+ to the first stop in Kineton 37km from the start. It turned out only one of the guys was actually on the Audax and I ended up doing the rest of the route with him.

More and more Audaxers arrived as we sat and had good coffee and bakewell slice, but after 20 minutes we were off, now as a pair. After the steep climb of Spring Hill, we flew through Wellesbourne and into Charlecote where it followed the Stratford CC Saturday morning route for a stint. Familiarity definitely helps as you know exactly where you can push the speed up without having to worry about an unexpected serious climb just around the corner.

We had a brief stop in Norton Lindsay to take down the numbers on a fire hydrant – an information control to prove that we had taken a certain line between Kineton and our next stop at Earlwood. It’s a simple solution from the pre-GPS days to weed out any potential foul play.
There were parts I knew and parts I didn’t in this middle part before eventually using the exact same run-in to Earlwood that I’d done on a ride on Wednesday evening. Using local knowledge I took the high road next to the lakes and went flying past on the hill on the other side. Time for another coffee stop!

The wind had been very kind up to this point with a tailwind blasting us along, it turned out we’d gone fast enough to actually get to this stop too early by a single minute. There are windows where these controls are ‘open’ in order to slow fast riders down at the top end and to provide a minimum speed at the other. The window was about 3 hours wide so plenty of time for all but the least able – the minimum average speed expected by an Audaxer is a very generous 9.37mph, which encourages more leisure time or the naps in the sun that I’ve done on a previous Audax.

The final third was distinctly difficult with a very strong headwind gradually wearing us down as well as the route being on main roads the entire way back to the finish. The windy descent on the dual carriageway to the outskirts of Redditch wasn’t particularly pleasant, nor the queue jumping at the roundabout at the bottom. With a steady taking of turns at the front, we still made good progress and it was certainly easier than if I’d have been on my own.

We both collectively hit a physical wall a few miles outside of Evesham and began struggling to the finish, one final climb over Greenhill and it was a nice descent into Evesham town for the finish.

Predictably we were the first ones back, which although not a race and receives no recognition is still an achievement. 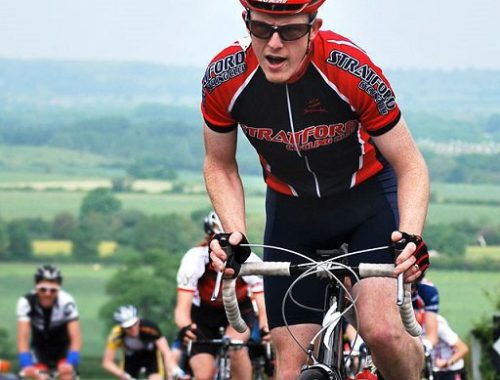 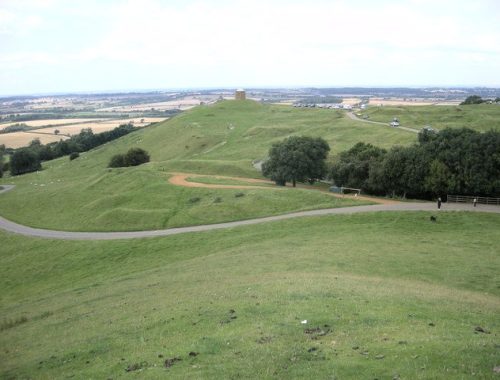