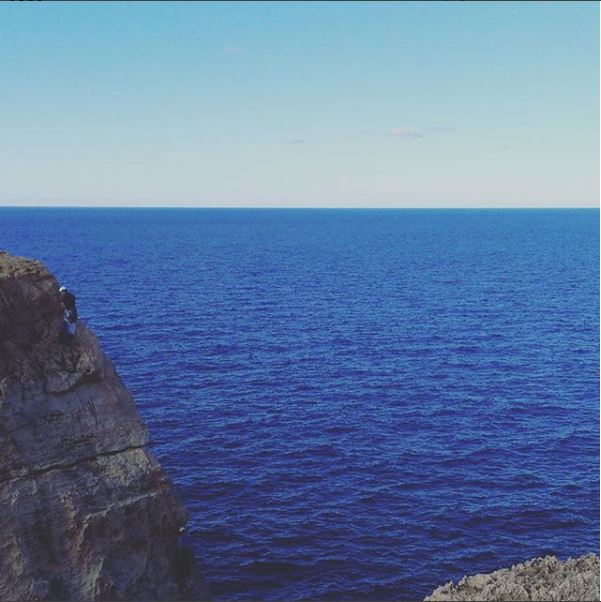 I’ve spent the last week having fun in Malta with Hannah, avoiding the winter snow back in the UK. We decided that a bike tour of Gozo, Malta’s second biggest island, was the best way to see things. In a rare occurrence, we would also be mountain biking as in Gozo road bikes aren’t de rigueur due to the rough roads.

Obviously when going somewhere new the best way to see things is from a bicycle. Having more range than being just on foot but also having time to soak in your surroundings and the ability to go down the tiniest of roads. In a car it’s too easy to blast past, sticking to the main roads and only seeing a fraction of what is possible.

It is by riding a bicycle that you learn the contours of a country best, since you have to sweat up the hills and can coast down them…. Thus you remember them as they actually are, while in a motorcar only a high hill impresses you, and you have no such accurate remembrance of country you have driven through as you gain by riding a bicycle.Ernest Hemmingway

We stayed on the main island of Malta in a town called Mellieha at the northern end. An airport transfer bus took us there from the only international airport in Luqa. It took about 25 minutes on the return journey but on the way out we were unlucky that some people were staying deep into Valetta and its traffic jams, so it took over an hour.

Regular busses go direct to the ferry port at Cirkewwa, the majority leave Valetta and go through the main towns en route like Mosta, Bugibba and St Paul’s. The ferry itself takes around 25 minutes to cross the Gozo Channel and costs €4.65 return (paid on the return from Gozo). Bottlenose dolphins and sea turtles are around to see from the ferry on very lucky days but the educational video that played on the journey suggests this is becoming less common.

We met our guide for the day immediately outside of the ferry terminal, a French guy called Jean-Christophe who has lived in Gozo for the last 8 years. We’d turned up in regular clothes with no nods to the day on the bike we were about to do. Our choice was questioned but we had no qualms spending the day like that or getting a bit mucky. Our bikes were taken off the back of a truck and we had the usual safety and stuff talk. One good thing for Brits in Malta is that they also drive on the left!

Straight away we were climbing up a long hill away from the port. This rather set the tone for the day, especially early on with a lot of climbing in store for us. The temperature had been a touch chilly when we first set off but with the excursion of going uphill, the jumpers came straight off. I tucked mine under the trap of the pannier for safe keeping.

Learning Why You Need the Mountain Bike in Gozo

The surface on the first climb was iffy, but would have been rideable on a road bike. Soon however we were on far worse roads that didn’t even used to have tarmac on them. Steep descents on gravel meant a crash course in technical descending on bikes we weren’t used to…and with backwards brake levers (even though they ride on the left?). On one descent I managed to lock my back wheel up and started skidding, I let go of the brake lever but kept skidding. It turned out my jumper had tried to commit hara-kiri by escaping the pannier trap and stuffing itself through the brakes, wedging itself between the wheel and frame. Luckily I managed to stop and extract it!

We cycled down to a couple of secluded beaches, used mainly by the locals when warm, which had epic climbs back up to the top roads. These were double figure gradients and for a while too. One beach we ended up doing a part descent and then walking back up – turns out it was 25% percent so we made the right call! The one beach was unusually orange, a result of the large orange rocks in that bay. The storms earlier in the year washed away most of the sand but it has begun to return. A line in the sand of ‘regular’ yellowy sand showed how much had gone.

Our next large climb took us up to a grotto that overlooks Ramla Bay, a beach popular with tourists usually. The grotto was a cave that was etched out of the rock and enlarged. Casually there was a wooden table, presumably for picnics, however there were no chairs. The view took in all of the bay to the other side, we could see our next climb ahead of us. Pillboxes littered the landscape, remnants of a different time.

The next climb was the steepest and most horrible. Strava suggests it had a max gradient of 31%, I was pulling unintentional front wheelies on each pedal stroke as I tried to grind away in my last gear. A car came up behind us and both Hannah and I used it as an excuse to pull over and let it go through. Walking the rest of the way proved a tough task by itself. Our guide had ground his way up without getting off, but he had a huge huge cassette on the back which gave him an advantage! The reward for climbing up this ‘wall’ was the best descent of the day. On freshly tarmac-ed roads I managed to hit 37mph on the mountain bike as we wound our way into Marsalforn for lunch on the seafront.

Leaving Marsalforn we headed towards the salt pans of Gozo. Initially these were squares cut into the rock by hand and then filled with seawater, which then once dry could be harvested for salt. One of these harvesters was selling bags for a few euros so we took one home with us. Once the square-cut rocks disappeared, what was left was a moonscape of a hard compacted sand coloured rock. Natural ramps and curves had been cut out of it so made for great fun on the mountain bikes. People had driven their cars on it in order to fish from the cliffs too. One highlight was the stone circles that we came across. A very unexpected thing to find coming round the corner.

We took a proper mountain biking track across the top of the Wied il-Ghasri (an inlet with steep cliffs) to take us to the Wied il-Mielah window. This track tested our new mountain biking skills being narrower and with genuine rocks instead of merely gravel roads. We both made it and didn’t fall down the cliffs! A limestone arch that extends into the Mediterranean Sea, there were a few climbers on there seeking a challenge. With the former Azure Window formation now washed into the sea, this makes a fine replacement.

We had a final steep climb (it’d been a tough day up to this point!) up to the chapel of San Dimitri which had a good view of where we’d been. The tour finished with an easy ride on proper roads into Victoria, the largest town on the island of Gozo. We had a quick cycle round the old town with its narrow streets and high walls before being shown the Cittadella. It was here that our tour ended and we finished up with a well-earned beer in a cafe in the ramparts of the Cittadella. 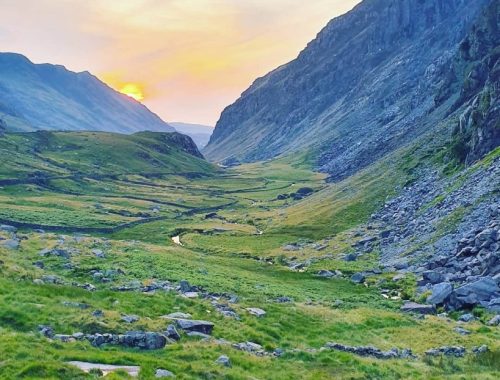 Riding the Silverstone F1 Circuit on a TT bike