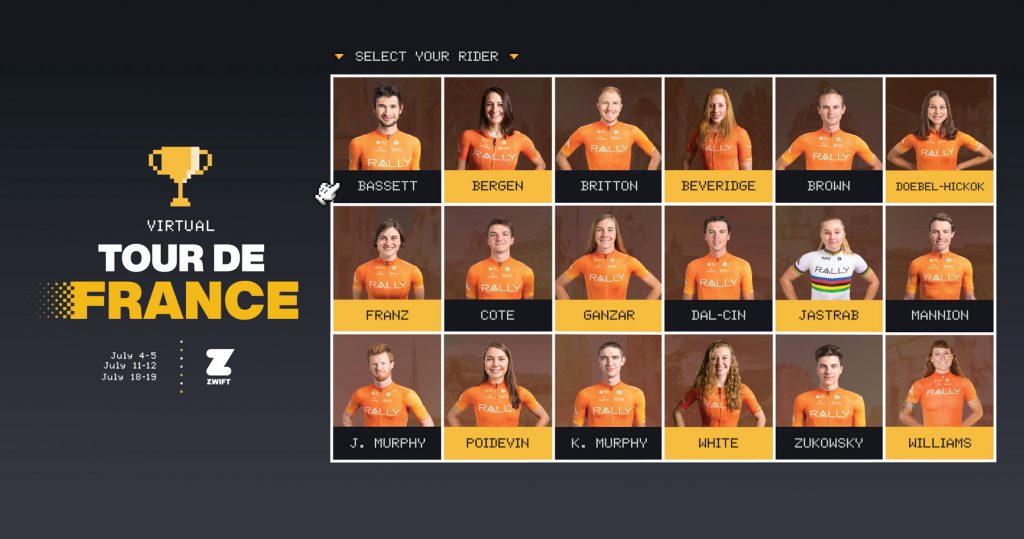 As the elite peloton heads into totally uncharted waters next month with the first-ever Virtual Tour de France (every Saturday & Sunday, 4–19 July), Rally Cycling is proud to announce its rosters for both the men’s and women’s races.

Each team will start four riders per stage. The number of total participants by each individual rider is limited – men will start a maximum of three stages while the women are permitted to compete in four.

Adapting to a new environment

The past few months have presented a few opportunities for the team to practice their virtual racing skills, as well as for the directors to deepen their understanding of this new breed of bike racing. Roster selection was heavily informed by those lessons.

As soon as the Virtual Tour was announced, men’s team director Patrick McCarty began a new kind of “scouting” for his own athletes.

“We chose the men’s roster based on our past successes in virtual racing,” said McCarty. “Some riders are simply better suited for the physical and psychological demands of racing online. Our riders are prepared and ready to make an impact in the upcoming virtual Tour.”

Zach Bell, director for the women’s squad explained some of the specific demands of Zwift racing over other platforms.

“We learned on Zwift that knowing and understanding the subtleties of the platform makes a big difference,” said Bell. “It’s a totally unforgiving form of racing where riders must operate at or above threshold almost constantly. Riders need to be tough and able to suffer pretty much from start to finish.”

While a high power-to-weight ratio is important in e-racing, the Virtual Tour de France will take place on Zwift, where not only drafting but also power-ups can come into play.

“During Zwift’s Tour for All, we saw some of our younger riders who are more familiar with the platform do really well,” McCarty added. “There are a lot of strategies involved with knowing the courses, when the resistance will kick in, when to be near the front, knowing how to minimize the effort inside the draft and knowing how and when to use your power-ups.”

How to watch the Virtual Tour de France