I headed over to Stourport on Severn after work for the Gannets circuit race and to go back to where my season began when I destroyed the back end of my bike warming up, way back in January now.

This race was following the full purpose built circuit, anti clockwise as usual (well for me anyway) and a nice change from the tight courses at Leamington and Solihull. With a lot more room the Gannets race should be crash free, despite being a 4th Cat Only race.

The weather had been inclemental all day with some rain a few hours before the race making the tarmac surface a little bit greasy. With that day’s Giro d’Italia stage showing how badly some people are at going round wet corners on road bikes, I decided to be conservative in the corners and aggressive on the straights when I needed to be – the golden rule being that you have to reach the finish to contest it.

People must’ve been put off by the weather, 19 showed up and 1 warmed up before calling it a day. With 18 starters the odds were very good that I’d be finishing in the top 10 of the Gannets race and getting my first points on the licence.

The early pace was quick, someone decided to solo attack from the start which never works so he was left to it for 5-10minutes to do his own thing. The bunch was strung out but together for awhile, keeping things sensible. Eventually though, it happened, someone decided to fall off. It was a bit of an odd one as it was the leader rider who just lost it, his front wheel slipping out from under him at low speed in the top hairpin. The rider following him took evasive action, looked to be clear and then fell off too. The bunch at the slowest part of the track anyway managed to make it through their carnage and carry on.

We had a huge shower that drenched the circuit, the greasiness turned into genuine wet with lots of water spray. In these changing conditions it became clear there was a group of around 5 riders (and me sitting in 6th wheel with them) who were stronger than the rest and they consistently took turns at the front and seemed in control. I was busy totting up numbers and worked out with 10 people now in the group, as long as I stayed upright, I would surely get some points.

Shortly afterwards we had the shout there was a Prime coming up, usually a sprint for a prize, it’s also a code word for ‘crash ahead’ as people become unpredictable chasing down something unimportant. Predictably we then had the second crash, the rider in front of me lost it coming out of the adverse camber corner at the bottom of the start/finish hill. I watched his rear wheel catch on the muddy grass and he speared off to the right and took someone else out. A very close near miss! 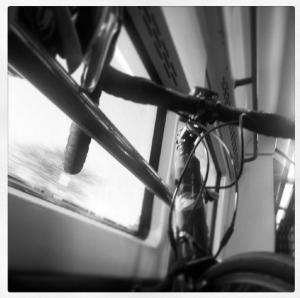 Getting to the Gannets finish

The Gannets race settled down and we all followed one rider who seemed to be stuck on the front pulling everyone to the finish. With 3 laps to go the pace ramped up again and it was back to proper racing. I was holding sixth wheel behind the five other strong riders comfortably until we reached the final hairpin on the last lap.

This is where in my first race I ran out of energy and dropped right back. Unfortunately this time it was lapped riders getting in the way. I got to the corner at the moment these riders took to the inside of the corner, only to have one swerve across me taking to a very odd line. This created a big gap at the crucial moment and I called the obstructive rider all sorts of words I wouldn’t want my grandparents to hear.

I was now effectively leading out the few people behind me for the finish so knew I had to accelerate hard to drop them and whilst sprinting hard up the hill, well into the red zone, a look under my shoulder showed I was on my own.

I coasted in for 6th at the Gannets race, good enough for 4 British Cycling licence points. A third of the way towards the next level!