Sunday’s Tour of Flanders or De Ronde for short is the highlight of the Flemish Spring Classics season. All of the races in the area that we’ve had so far have all been a lead-up to this race – one of the 5 monuments of cycling.

The race is tied in very closely to the culture and identity of the Flanders region. The sides of the road will be packed, particularly on the Oude Kwaremont and the Paterberg which get repeated visits and will probably decide the outcome of the race. Previously the race was dominated by Fabian Cancellara and Tom Boonen but since last win in 2014, we’ve seen no repeat winners. This year, 3 cyclocross world champions who have made the jump to the road are the favourites.

He’s never won the Tour of Flanders but Greg Van Avermaet has finished in the top 10 7 times – he should be a lock again in 2019. 2nd and 3rd in the Flanders warm-up races in Omloop het Nieuwsblad and E3 Binckbank means he’s in good form. Last year’s winner Niki Terpstra is finding things a bit tougher at Direct Energie, he’s animated races but only finished 15th and 20th at Omloop/E3. 3rd places at Le Samyn and Kuurne Brussels Kuurne shows there is form there however. Peter Sagan is apparently aiming for the Ardennois classics this year and his Flandrian races appear to back this up. He finished only 32nd in Gent Wevelgem this year, a race he’s won 3 times previously. He’s impossible to rule out but maybe manage expectations.

Almost all of Deceuninck-Quick Step’s team could win. 2017 winner Philippe Gilbert can never be ruled out, even in the twilight of his career. He managed 8th and 11th in the Omloop/E3 combination of races. Zdenek Stybar is the man in serious form though, he won both Omloop het Nieuwsblad and E3 Binckbank this year and finished 4th in Strade Bianche. He’s a top-3 favourite as a result. Bob Jungels has had fun in the last week, finishing 5th in E3 and 3rd in Dwars Door Vlaanderen. Taking part in the break in E3 and hanging onto the leader’s group despite being dropped a couple of times shows his strength. Yves Lampaert doesn’t have the best record at De Ronde, finishing a highest of 24th but he finished 7th at Omloop, 8th at Dwars Door Vlaanderen and 18th at E3 – he could be a useful card to play.

Alexander Kristoff won the Tour of Flanders back in 2015 and has 5 top-5 placings. He was having an alright classics season until he pulled a Gent-Wevelgem win out of the bag last weekend. He followed it up with 12th at Dwars Door Vlaanderen and should be a sneaky bet for another top 5. It’s not been a good classics season for Sep Vanmarcke so far, 92nd in Omloop het Nieuwsblad and a DNF at E3 after crashing out. He’s still reporting as being a little bit injured but should be on the start line – temper expectations for him in 2019’s De Ronde. Tiesj Benoot has finished 5th and 8th in his two previous attempts at the Tour of Flanders. 16th at E3, 13th at Gent-Welvegem and 5th at Dwars Door Vlaanderen is an encouraging trend. He’s a sneaky bet for a podium. 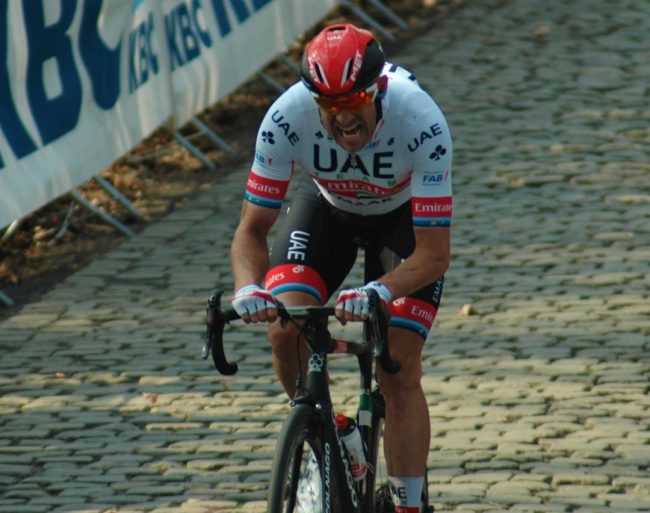 The cyclocrossers Wout van Aert and Mathieu van der Poel are joint favourites with the bookies currently. Wout van Aert finished 9th in his first attempt last year, now on a stronger team and in the midst of a solid classics campaign, he’s got a decent chance. Podiums at Strade Bianche and E3 shows very good form. Mathieu van der Poel is definitely the form guy though. He won the non-Worldtour GP Denain, then finished 4th in Gent-Wevelgem before winning his first Worldtour race at Dwars Door Vlaanderen. He’s the exciting prospect who is really announcing himself on the road. He’s also looking to repeat his father’s success who won this race in 1986.

Oliver Naesen is someone who should have a top-10 finish in the Tour of Flanders but somehow doesn’t. He’s in good form though in 2019, finishing 2nd in Milan-Sanremo, 8th in E3 and 3rd in Gent-Wevelgem. He’s shown a bit of a better sprint ability this year which could put him in good stead if he can make the final group heading into Oudenaarde. Michael Valgren should be an out and out favourite but the Dimension Data regression curse seems to have taken hold. The form is iffy with positions of 45th in Omloop, 39th in E3 and 29th in Dwars Door. Probably won’t be a serious contender in 2019.

John Degenkolb on the Oude Kwaremont

There’s the Trek-Segafredo and Team Sky pairings. Trek have John Degenkolb and Jasper Stuyven to front up their attack. Degenkolb announced himself in 2019 by finishing 2nd in Gent-Wevelgem last weekend. He’s someone who can finish in the top-10 with this form. Jasper Stuyven didn’t do too much in the early part of the classics season but in the last week has finished 17th and 14th in Gent-Wevelgem and Dwars Door in the last week. If the upward trend continues he can sneak into the top-10.
Luke Rowe is the form guy for Team Sky having finished 18th in Gent-Wevelgem and 6th in Dwars Door. He’s managed a 5th in the Tour of Flanders before and in current form could repeat that. Dylan van Baarle was signed to be a classics guy for Team Sky after a strong 2017. He’s blown a bit hot and cold but was 12th in last year’s De Ronde, close to his best results of 4th and 6th. He won the overall at the Herald Sun Tour earlier in 2019 and finished 14th in Omloop. He may sneak back into the top-10 positions.

Sebastian Langeveld is somehow back in the hunt, despite it being many years since he was a genuine contender. He won Omloop het Nieuwsblad way back in 2011 and didn’t replicate it until last year’s 3rd place at Paris-Roubaix. This year he’s managed 15th at Omloop and 12th at E3 to be put back on the contenders map. He’s a sneaky outside bet for the top-10 in current form. Edvald Boasson Hagen has never finished higher than 17th in this race and has been part of the invisible Dimension Data team in 2019. He’s not in the best form but is impossible to completely rule out.

Arnaud Demare is someone who could/should get a top-25 placing but his classics season so far hasn’t been great after an illness took him out of Omloop het Nieuwsblad at the beginning. Mads Pedersen had an amazing result at De Ronde last year when he finished in 2nd place. He did well at Tirreno-Adriatico this season but his classics results aren’t amazing. Tough to rule out someone who did so well last year though.

Finally, the current World Champion Alejandro Valverde is having a go at some of the cobbled classics this season.