The WorldTour’s trip around the Middle East moves to Oman this week but this race will have a slightly different feel to the others…it has hills!

Pretty much all the big Grand Tour contenders will be in attendance here and the race has a little bit for everyone.

The race begins with two stages which suit the sprinters, the second one may suit rouleurs slightly more but the likes of Sagan should easily be in the mix, after this the sprinters won’t have much to do until the final Stage 6.

Stage 3 will probably see the first powerplay moves by the contenders, the race won’t be won there but it will certainly be lost by a couple.

The end of Stage 4 will be run on a hilly circuit, 4 climbs of a reasonably difficult climb should remove all but the strongest, a mix of contenders and rouleurs should finish together.

Stage 5 is the big one, the Queen Stage. With a summit finish, this one will be the decisive stage and will give us our first glimpse at who looks good this year. This stage will either give riders confidence or nightmares as a result.

Cannondale at the Tour of Oman

So, rider tips, who will come good?

I did ok on the Tour of Qatar, picking one podium place correctly and Boonen won some stages. Here the GC race is wide open!

Andre Greipel seems a cert for the first and last stages, the likes of Tom Boonen and Morkov should be present based on Qatar. Nacer Bouhanni should finish in the top ten in at least one stage and Kristoff should make an appearance.

Stages 2, 3 and possibly 4 seem perfect for Peter Sagan, he should have the strength to get over the hill near the end of stage 2 and will probably fight it out with Boonen and Fabian Cancellara on Stage 3. These stages have a Classics feel to them so maybe Gilbert, Van Avermaet and Terpstra will make a move here. 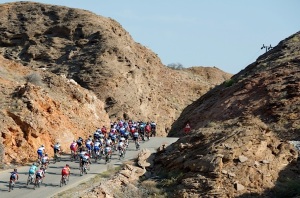 Stages 4 and 5 should bring out the contenders. There is a huge field of GC riders at this race. Last year’s winner Chris Froome, Vincenzo Nibali, Joaquim Rodriguez, Roman Kreuziger, Nicholas Roche, TJ van Garderen and Rigoberto Uran are all genuine contenders and the focal points for their teams. There’s also a host of the next level riders, the likes of Dani Moreno, Henao, Christophe Riblon, Robert Gesink, Leopold Konig, Nieve and Pozzovivo. We’ll probably see some of these riders do well on one day but not the other.

The massive wildcards here are Andy and Frank Schleck. Andy was well off for most of last season but is getting better and Frank could be in any possible state…they’ll be team leaders so could do anything here.

The podium should be Froome, Nibali and Rodriguez based on quality and probably in that order, though Nibali could sneak the win.

I expect Greipel and Sagan to win at least one stage each and Tom Boonen is definitely capable of a stage win too.